COMING UP: Check back soon!

THE JOLLY E-MAIL CLUB: SIGN UP & SAVE
The History of Jolly Shows 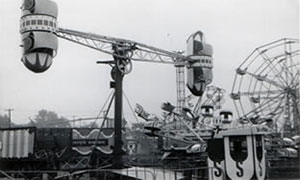 The Jolly Shows HistoryLike so many young men during the great depression, Frank Joseph had many doubts about the future. After all, he had two young children and didn't really have a vocation. Since his mid teens though, he had worked hard at many things and had always managed to save some money. He dreamed of someday being in business for himself The nightclub business was his first thought. He liked the idea of a place where people could go to laugh, have fun, and forget about their troubles. He was quickly discouraged from this venture though, by his wife, Ann. She reminded him of how low his tolerance was for drunks, especially since he had never had a drink in his life.

The idea of a business that made people happy though, never left his thoughts. While visiting a firemen's carnival with his children in 1939, Frank saw what he thought might be the new business for him. He counted the people in line at the "Roll-O-Plane" and watched as the thrilled riders exited the ride, and got right back in line to ride again. He visited the carnival again each of the next three nights and paid even closer attention to the operation of amusement rides. He was now sure that this is where he would invest his savings.

Frank Joseph bought his first amusement ride, an Eyerly Aircraft, "Roll-o-Plane" in 1939. A few years later came an "Octopus" and "Spitfire'.  He operated these rides seasonally at local amusement parks, church bazaars, firemen's carnivals, and county fairs throughout the late 1940's. By now, his oldest son Pete was in his late teens and able to help his father with the business.

Pete married in 1954 and the business had to get a little bigger to support the two families. In 1958, the Father and Son partnership, allied with a small carnival operator, Bill Enfante, in the Washington, D.C. area to form Jolly Shows. Mr. Enfante had gained local fame as a promoter and believed that with the addition of the Joseph's rides to his existing operation, they could together form a more profitable venture. 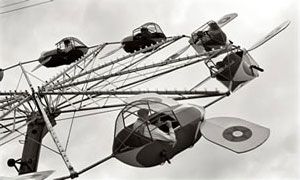 Mr. Enfante's beliefs held true. The small show did well through the 1960's and into the early 1970's by operating exclusively in the Washington D.C. metropolitan area. The Joseph's now had just what they wanted. They were in a business that they enjoyed and could make a good living at, and at the same time, could maintain stable family lives by avoiding the rigors of the carnival "road life".

Mr. Enfante passed away in March of 1973. Frank, Pete, and younger brother, Bob, purchased Mr. Enfante's interest in the business from his estate. Frank Joseph & Sons was incorporated in the state of  Maryland in that same year and now possessed 100% ownership of Jolly Shows.

Today, Jolly Shows is operated by Frank Joseph's three grandsons; Randy, Peter, and Paul. We still operate almost exclusively in Maryland and Northern Virginia. Our events are comprised of local county fairs, regional festivals, firemen's carnivals, and fund raisers for non-profit organizations such as the Muscular Dystrophy Association and the United Way group of charities.

Our local market is comprised of some of the highest demographics in the country. We operate in several of the wealthiest counties in the United States. In this area, there are more attorneys and more college degrees per square mile, than anywhere in the country. In this demanding atmosphere we have managed to achieve a reputation as one of the industry's truly "clean shows". We are now finding it possible to operate at venues and in jurisdictions, within this region, where carnivals were not permitted to operate in the past.

We are a new generation of carnival operators who strive to be more progressive and professional. We realize that we must produce a premium product for our customer's hard earned money. We won't forget our proud traditions, but we are committed to overcoming the stigmas which have hindered our industry for far too long.